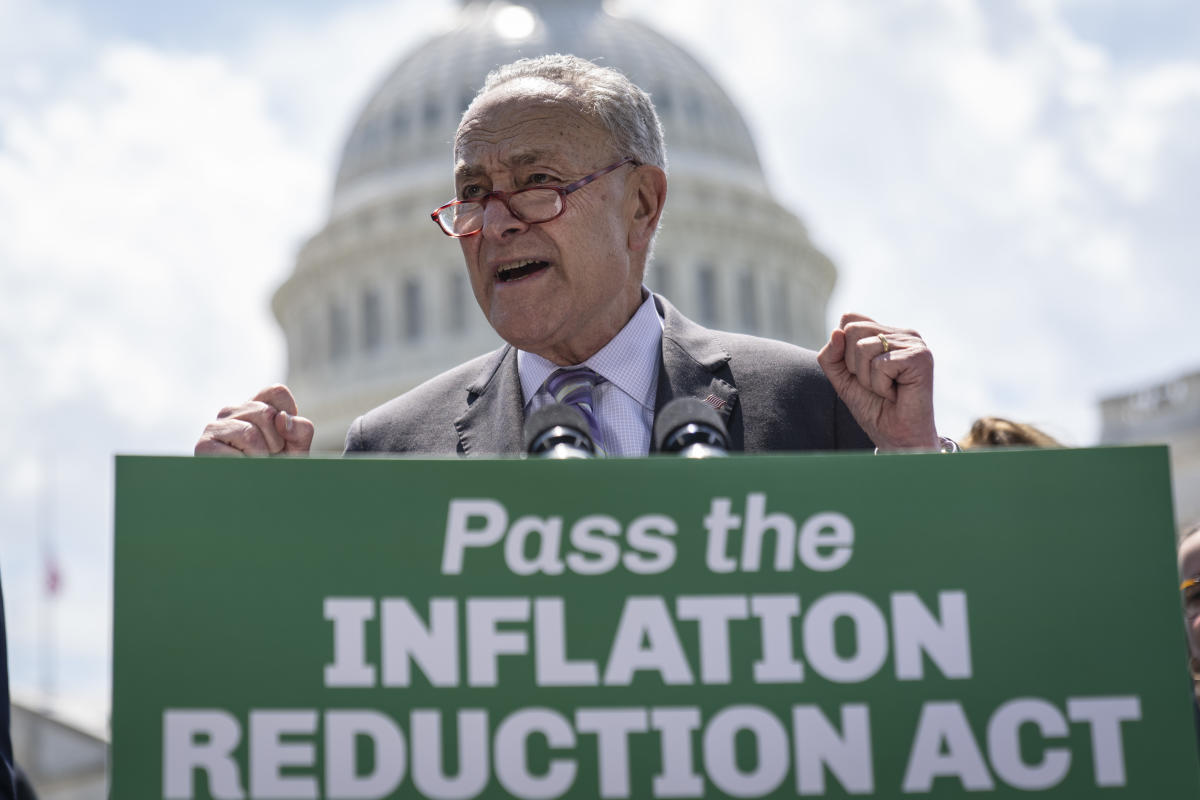 It’s a deal set that is set to use hundreds of billion dollars over the coming decade to reshape the fight against climate change, how Obamacare works, the price of prescription drugs, and the US tax code’s treatment of big corporations.

Sens. Chuck Schumer (D-NY) and Joe Manchin (D-WV) surprised the world on July 27 when they released their sweeping bill known as the Inflation Reduction Act (IRA). Then on August 4, Sen. Kyrsten Sinema (D-AZ) propelled the deal closer to the finish line when she announced she would support the bill after of course making a few tweaks.

The so-called IRA — which still has plenty of hurdles to overcome before it becomes law — is a far cry from some early Democratic ambitions but nevertheless marks a potentially giant win for Biden and Democrats just a few months before November’s midterm elections.

The rapid turnaround on the bill has left Democrats celebrating and Republicans shell-shocked. On August 4, Biden said in a statement that Sinema’s support was “another critical step toward reducing inflation and the cost of living for America’s families.”

Republicans are expected to line up en masse against the proposal but it can pass with only the votes of all 50 Democratic senators because of the rule of reconciliation.

The bill has gained the support of figures like former Treasury Secretary Larry Summers, who notably predicted the Biden administration’s post-pandemic stimulus efforts would stoke inflation. He reportedly helped shape this deal and said in a recent Yahoo Finance interview, “I think that the total effects of this bill could very likely be positive.”

Here’s what the IRA will do:

About $390 billion for climate change and energy efforts

The centerpiece of the bill is a giant allocation toward climate change and energy efforts. Schumer has noted repeatedly that this bill “will be the largest action on climate change ever passed by the Congress.”

If enacted, it will spread money all around the green economy, from $9 billion toward a program to retrofit homes to $20 billion to manufacture more electric vehicles. Automakers like GM (GM), Tesla (TSLA), and Toyota (TM) are expected to benefit from the money as well as the expansion of a $7,500 EV tax credit included in the deal.

Approximately $385 billion in total will fund clean manufacturing, agriculture efforts, and other sectors.

Advocates for the package say it will reduce US carbon emissions by roughly 40% by 2030. The news has climate activists, who had largely given up on the chances of action from Washington DC this year, ecstatic. As one example, Evergreen Action Executive Director Jamal Raad said in a statement that the bill could “mitigate the worst impacts of climate change, reduce energy costs for working families, and save countless lives.”

The bill also has provisions that would impact the energy industry more widely, including new rules around federal land sales that may lead to oil drilling and a fund to permanently extend the Black Lung Disability Trust Fund. That will help many former coal miners in Manchin’s home state of West Virginia. In total, the bill has many provisions that even the oil industry has gotten behind.

Late in the process, according to multiple news reports, Sinema secured an additional $5 billion in the bill to combat droughts around the country. The provision will be welcomed in her home state of Arizona and others in the Southwest that are suffering a drought that, by one measure, is the worst in 12 centuries.

Changes to the health care system

The bill also makes significant changes to the health care system. One key provision will allow Medicare to negotiate for prescription drug prices. Current law prohibits Medicare from intervening in the talks between drug makers and health plan sponsors. The new rules would allow the government to weigh in to push down prices and save consumers — and the government — billions.

The bill also would add an inflation cap on drug prices to stabilize monthly costs and cap out-of-pocket drug expenses through new rules on rebates. All told, budget experts expect the combined changes will bring $320 billion into the US Treasury in the coming decade.

The IRA also extends grants for health insurance costs that began in the 2010 Affordable Care Act for an additional three years. That provision comes with a price tag of about $64 billion. The grants had previously been extended in the American Rescue Plan and are currently set to expire this fall. If the bill doesn’t pass, millions of Americans could see price increases in the fall.

About $300 billion for the deficit

A cherry on top for advocates of the package is that the bill will reduce the deficit by over $300 billion over the coming decade through a series of “pay fors” (more on that below).

Manchin made deficit reduction a must-have portion of the bill to earn his support and noted “it is past time for America to begin paying down our $30 trillion national debt” in announcing his support for the deal.

Questions have been raised about the actual inflation-fighting powers of the bill, most notably in the Penn Wharton Budget Model. Their first estimate of the bill and found little inflation impact. It “would very slightly increase inflation until 2024 and decrease inflation thereafter,” it stated.

Other estimates have found slightly higher inflation impacts, leading to partisan sniping on the issue and whether the bill is misnamed.

New taxes to pay for it

To pay for it all, in addition to health care savings, the bill makes three changes to the tax code.

There is a new minimum corporate tax that would apply to corporations that have made over $1 billion in book profits in recent years. That idea was initially projected to raise $313 billion, but a change from Sinema around rules about depreciation that manufacturers had loudly complained about is expected to lower the returns by about $40 billion.

The deal also will put aside billions to help the IRS chase down tax dodgers. Experts predict a hefty return on investment: The $80 billion added to the IRS budget is expected to bring in $203 billion in taxes.

Finally, the deal would reportedly add a new 1% excise tax on stock buybacks. That provision, another late addition to gain Sinema’s support, will reportedly bring in $73 billion to the US Treasury. Removed from the deal was a plan to lessons the so-called “carried interest loophole,” which wealthy money managers can use to pay lower taxes on their capital gains.

Some figures, including the investor Kevin O’Leary, contend that things like the new minimum corporate tax could make the US less competitive. “That’s not a good move because you want to keep our economy competitive,” he told Yahoo Finance,

But from the perspective of Democrats in Washington, the overall tax effort will “begin to restore fairness to the tax code,” as Biden put it recently.

He and others note that the minimum tax would target the biggest companies in America, including the 55 members of the Fortune 500 that paid no federal income tax in 2020.

Ben Werschkul is a writer and producer for Yahoo Finance in Washington, DC.