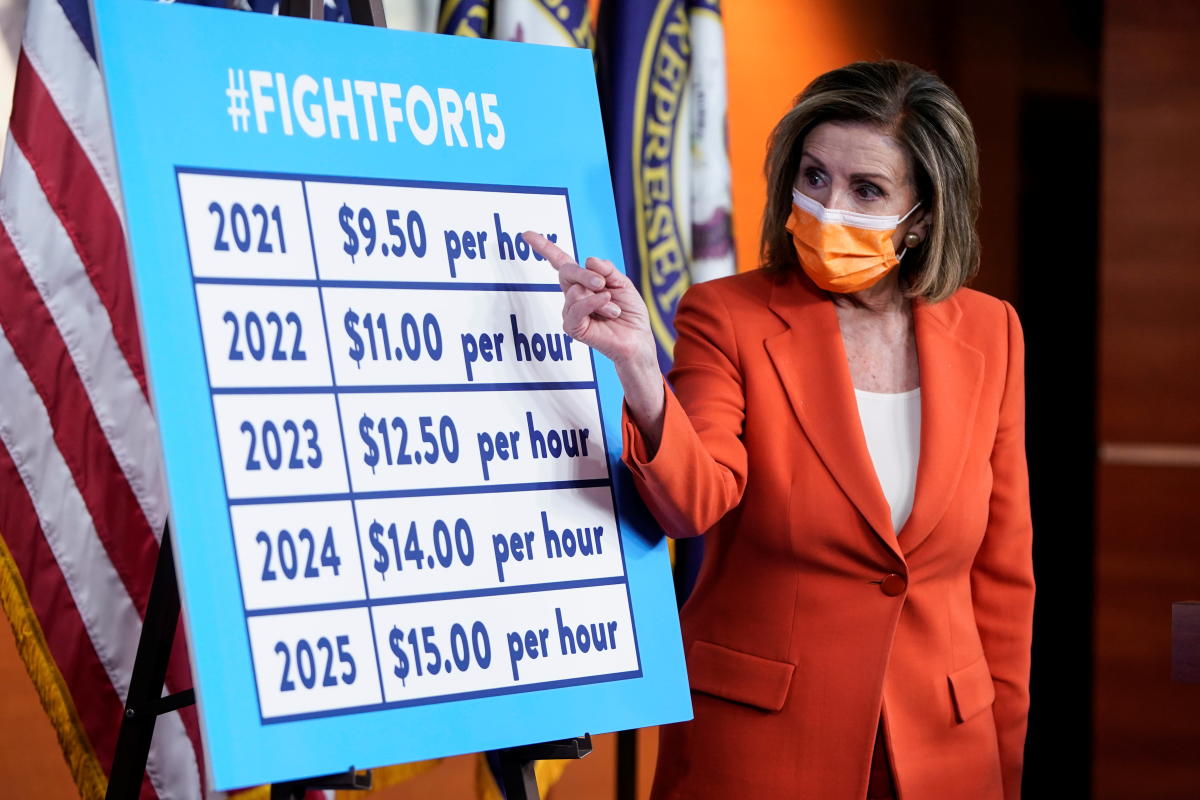 It’s been 13 years since Congress raised the federal minimum wage, the longest period without an increase since 1938.

A recent Economic Policy Institute (EPI) analysis found that after adjusting for inflation, the current federal minimum wage of $7.25 an hour is now worth less than at any point since 1956. The purchasing power for workers making the federal minimum wage diminished by 27.4% since 2009, when the starting wage was last increased.

The trend “is really striking because we are a much richer country,” Ben Zipperer, an economist at the Economic Policy Institute, told Yahoo Finance. “Workers are vastly more productive. In fact, they’re more than twice as productive as they were five decades ago, yet the wealth that we’ve gained in the meantime, the increases in productivity, in their benefits aren’t being shared broadly.”

Pressure has been mounting in various parts of the economy to raise wages to a higher standard as rising inflation has eroded workers’ purchasing power.

In June, US consumer prices jumped by 9.1% year over year, the fastest gain in 40 years. As some economists have pointed out, these price increases have weighed especially heavy on lower- and middle-income households.

Minimum wage raised in some places, but not everywhere

The Biden administration has advocated for a $15 federal minimum wage, which would lift the pay for 32 million Americans. Earlier this year, President Biden signed an executive order requiring a raise for federal contractors to $15.

The White House also pushed to bump the national minimum wage to $15 in early 2021; however, the effort was halted by the Senate parliamentarian, who deemed it ineligible to be included in the COVID relief bill.

Although efforts to raise the minimum wage have stalled at the federal level, state and local municipalities have stepped in with a wave of wage hikes across the nation.

Since 2014, 30 states — including Nevada, Oregon, Connecticut, South Dakota, New York, California, and New Mexico — plus Washington, DC, have implemented higher starting wages than the federal minimum. And this year, 44 cities plan to increase their starting hourly wage to $15 or higher.

Still, there are significant gaps in where workers can earn a livable wage. 20 states still have a minimum wage no higher than the $7.25 federal level.

That has made it more difficult for low-wage workers to obtain basic necessities like affordable housing. For instance, a 2021 LendingTree study found that the median rent and home price weren’t attainable for minimum wage workers in every state.

“Some of those minimum wage increases aren’t enough in my view in order to maintain a basic standard of living, like being able to afford rent and utilities and so forth without hardship,” Zipperer said. “But certainly in the places that aren’t raising the minimum wage, low-wage workers are just being excessively punished.”

The private sector has also moved of its own accord to raise minimum wages, particularly as labor shortages have hampered businesses rebounding from the coronavirus-induced slowdown.

Retail giants, fast-food chains, and ride-hailing companies have all taken action by offering higher wages, cash payments, and signing bonuses to fill low-wage jobs. In some cases, the incentives have crept toward a starting wage of $15.

On August 1, Starbucks (SBUX) lifted its starting wage to $15 an hour, bringing its average hourly rate for employees to $17. McDonald’s (MCD) also announced last year it would raise hourly wages by about 10%, bringing the average wage at its restaurants to more than $13 an hour. And Chipotle Mexican Grill (CMG) said it would set hourly starting wages between $11 and $18.

Some small businesses have backed a minimum wage hike too, though others have argued that a higher wage floor puts a burden on Main Street business.

And as private companies raise their wages, it could pose a problem for government hiring, though that scenario hasn’t yet been borne out in a significant way.

“The federal government has to compete for workers, just like any other industry,” Joe Brusuelas, chief economist at RSM, told Yahoo Finance in a phone interview. “When you have an economy that has a 3.6% unemployment rate, has 10-11 million job opening, public workers have real alternatives. And my sense is, if we don’t see an increase in a prevailing minimum wage, you’ll see a great exit away from public service.”

Meanwhile, the gap between those making minimum wage and high-wage earners has grown.

According to a report from AFL-CIO, a trade union that advocates for higher wages, the average American CEO of an S&P 500 company earned 324 times more than the median worker in 2021. That year, CEO pay rose 18.2% while worker wages rose by just 4.7%, well below inflation.

Wage gains are “mostly being concentrated at the top,” Zipperer explained, adding that, in his view, this amounts to “economic malpractice.”

“The money is there,” Zipperer added. “Where workers can’t have a decent standard of living [is] on these egregiously low wages.”